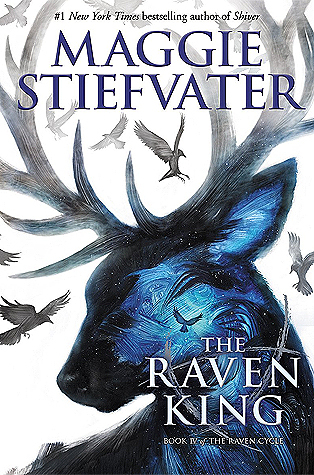 Now the endgame has begun. Dreams and nightmares are converging. Love and loss are inseparable. And the quest refuses to be pinned to a path” (Goodreads Synopsis).

IT’S FINALLY HERE! Unintelligible noises erupted from my mouth when I was told the audiobook had FINALLY come in. I’ve been waiting For-ev-ER on this book to come out. As such, I refused to start any other book until it got here. This “review” is going to be review Part 1 of 2 on the Raven King because I’ve only just started on disc two of the audiobook. So far it is amazing (although my complete adoration of this book series leaves me completely biased).

Will Patton is the narrator of these books and he is SUPERB. If you’ve ever watched Armageddon or Remember the Titans, then you know who Will Patton is. His Gansey voice just…just…gah, you all need to listen. Maybe I’ll find a snippet and include it in the bottom of this post.

This book takes place shortly after (maybe a week?) the last book ends. All of the characters are still coping with the ending scenes of Blue Lily, Lily Blue. So far, all of the boys are still focused on how they can keep Gansey alive. Ronan is trying to dream a skin-armor, Adam is still trying to be the one who gets the wish from Glendower, and my instinct says that Noah is clinging to life to protect Gansey when the time comes.

Look for Part 2 of my Raven King review in a week or so…once I’ve actually finished the book.