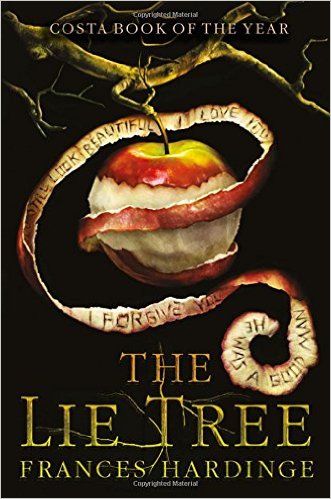 “The boat moved with a nauseous, relentless rhythm, like someone chewing on a rotten tooth” (The Lie Tree, Page 1, Sentence 1).

“It was not enough. All knowledge -any knowledge- called to Faith, and there was a delicious, poisonous pleasure in stealing it unseen.” Faith has a thirst for science and secrets that the rigid confines of her class cannot suppress. And so it is that she discovers her disgraced father’s journals, filled with the scribbled notes and theories of a man driven close to madness. Tales of a strange tree which, when told a lie, will uncover a truth: the greater the lie, the greater the truth revealed to the liar. Faith’s search for the tree leads her into great danger- for where lies seduce, truths shatter…” (Goodreads synopsis)

The first sentence sets the tone for the entire book. This book is dark and ominous–a murder mystery where lies are the answer to the truth.

Faith Sunderly wants nothing more than to be a female scientist in a world that tells her that female skulls are too small for intellectualism. Faith, her little brother, her mother, her father, and her uncle all move to a small island off the coast of England to get away from a scandal. While on the island, Faith’s father dies with most of the island believing it to be a suicide–and Faith knowing that it wasn’t. At the root of the mystery is a tree that Faith helped her father hide on the night of his death. This tree is Faith’s means to find out who murdered her father.

Faith manages to manipulate an entire island with a few well-placed lies. These lies serve multiple purposes. One: they help feed the tree, two: they serve revenge on specific people who have slighted her family, and three: they help flush out the murderer. If being a scientist doesn’t work out for Faith, I definitely think she’s got a future as a spy. I never even guessed as to who the murderer was, but I love how Hardinge tied everything together at the end.

Read-a-likes include: The Night Gardener by Jonathan Auxier; The Dark Days Club by Alison Goodman; and The Cure for Dreaming by Cat Winters.