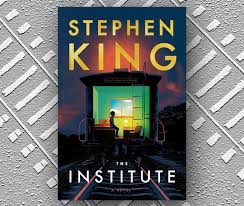 “He was only twelve, and understood that his experience of the world was limited, but one thing he was quite sure of: when someone said trust me, they were usually lying through their teeth.”
― Stephen King, The Institute

Goodreads synopsis: The Institute. In the middle of the night, in a house on a quiet street in suburban Minneapolis, intruders silently murder Luke Ellis’s parents and load him into a black SUV. The operation takes less than two minutes. … Luke will wake up at The Institute, in a room that looks just like his own, except there’s no window.

I’ve been so excited to read this Stephen King novel! It’s such an engaging story. You won’t want to put it down.  What’s happening to Luke is a nightmare. To be kidnapped, and have no idea where you are or what will be done to you would be terrifying.  Luke is a very likable character, and you feel like you are along for the ride. If you like mystery, suspense, and a bit of horror, you should give this book a try!