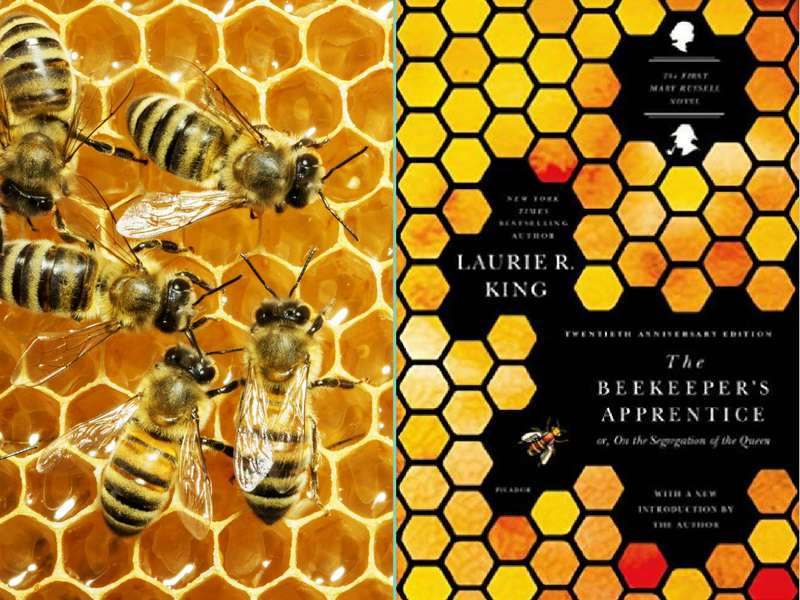 “You cannot help being a female, and I should be something of a fool were I to discount your talents merely because of their housing.”

“I was merely going to say that I hope you realize that guilt is a poor foundation for a life, without other motivations beside it.”

Of all the books I have recommended while working here at the library, the one that has received the most positive response also happens to be my favorite book of all time, The Beekeeper’s Apprentice, the first in an ongoing series by Laurie R. King.

In this novel, a young woman named Mary Russell is growing up in an abusive household headed by her adoptive aunt. To escape the abuse, Mary often sneaks out of her home to read while walking in the British countryside. One day while reading and walking, she literally stumbles over an elderly gentleman studying bees by the road. It is soon revealed that he is none other than the legendary Sherlock Holmes, long retired from the detective lifestyle.

From this point, the novel focuses on the dynamic between Mary and Sherlock as England inches ever closer to World War I. Mary is a product of the turn of the century, a studying theologian and self-proclaimed feminist in a time when women’s issues were just being acknowledged. While she is highly intelligent, years of abuse and heartache resulting from the loss of her parents have left her without a lot of opportunity to grow.

Sherlock Holmes makes a fantastic secondary protagonist, and this debut novel does away with many preconceptions of the great detective. Where Holmes in the original Conan Doyle books would never become associated with any woman as a working partner, in this story he is older, wiser, and much more aware of the ways the world is changing. This leads him to accept the fact that it would be foolish to let this young woman’s intellect falter under any circumstances, and compels him to become a mentor to her, coming out of retirement along the way.

As a big case unfolds, the two kindred spirits learn from each other, giving the reader a view of a unique friendship that is rarely present in other books. Mary grows into an intelligent young woman under Holmes’ care, and the focus on the humanization of Holmes brings about a narrative usually unexplored in other Sherlockian novels.

The Beekeeper’s Apprentice by Laurie R King is great for mystery fans and those who enjoy books with a focus on character-driven narratives. I hope it becomes a new favorite to many more people.

Click here to find this book in the catalog.