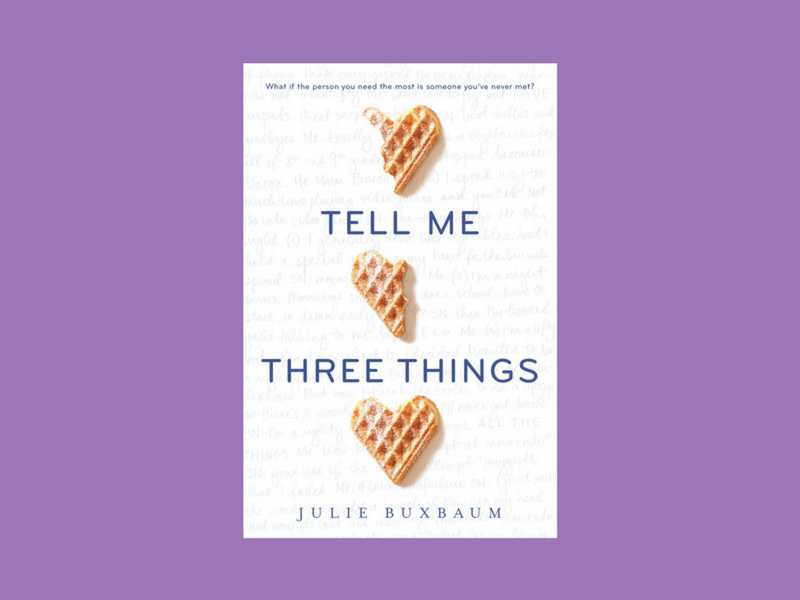 “Seven hundred and thirty-three days after my mom died, forty-five days after my dad eloped with a stranger he met on the Internet, thirty days after we then up and moved to California, and only seven days after starting as a junior at a brand-new school where I know approximately no one, an email arrives” (Tell Me Three Things, Page 1, Sentence 1).

“Everything about Jessie is wrong. At least, that’s what it feels like during her first week of junior year at her new ultra-intimidating prep school in Los Angeles. Just when she’s thinking about hightailing it back to Chicago, she gets an email from a person calling themselves Somebody/Nobody (SN for short), offering to help her navigate the wilds of Wood Valley High School. Is it an elaborate hoax? Or can she rely on SN for some much-needed help? It’s been barely two years since her mother’s death, and because her father eloped with a woman he met online, Jessie has been forced to move across the country to live with her stepmonster and her pretentious teenage son. (Goodreads synopsis).”

I loved this book—I couldn’t put it down. It was like reading a hybrid of A Cinderella Story mixed with Faking It. Jessie is a girl after my own heart. She loves books, is honest (if a tad more outspoken than I could ever dream to be), and isn’t afraid to stand up for what she thinks is right. Favorite moments in the book: when Jessie finally tells her dad how she’s feeling, every interaction between Theo (Jessie’s new step-brother) and Jessie, and Jessie’s reaction when she realizes who it is that has been messaging her—Jessie wasn’t the only one with a goofy smile.

Although this book deals with the grief of losing someone important to you, it doesn’t have the heavy feeling of typical grief-stricken teen books. This book is loaded with witty banter, which probably helps keep it on the lighter side. Also… spoiler alert…this book has a happy ending. If you are one of those people who likes weeping your heart out and being punched in the gut at the ending, then this book isn’t for you. This book delivers smiles, winces of sympathy, and tons of truth about being a teenager.

The Truth About Forever by Sarah Dessen, Always and Forever, Lara Jean by Jenny Han, and One of those hideous books where the mother dies by Sonya Sones.