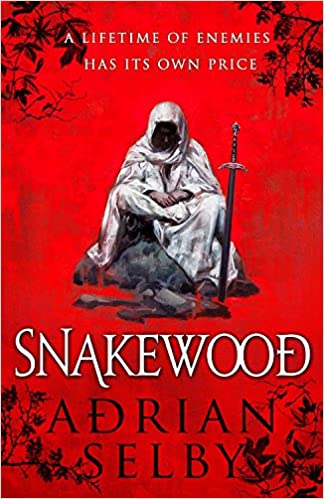 “Mercenaries who gave no quarter, they shook the pillars of the world through cunning, chemical brews, and cold steel.

Whoever met their price won.

Now, their glory days are behind them. Scattered to the wind and their genius leader in hiding, they are being hunted down and eliminated.

Snakewood by Adrian Selby tells the story of the final days of Gant, formerly a member of the legendary mercenary group Kailen’s Twenty. After being fatally poisoned on a job gone wrong, Gant and former Twenty member Shale receive word from their former mentor Kailen that members of the Twenty are being hunted down and killed by mysterious forces. Short on time and resources, Gant and Shale must seek out their former comrades and determine the identity of the assassin, their only clue being Kailen’s suspicions that it has something to do with the group’s disbanding at Snakewood fifteen years prior. Unbeknownst to them, there are far greater forces at work than rival mercenaries or slighted business partners.

Selby presents a grim take on the classic fantasy setting filled with violence and political scheming. In lieu of traditional magic and monsters, soldiers make use of brews and mixtures that grant amazing abilities that take a terrible, sometimes deadly physical toll. Paste is rubbed into the eyes to grant telescopic sight, fightbrews are ingested to grant enhanced strength and speed, salve and bark is administered to close up wounds mid battle. The soldiers with better brews win battles without exception. Warfare is entirely dependent on these effects and the nations of the world are caught up in a chemical arms race to possess the most potent stimulants and deadliest poisons.

The story of Snakewood is told through a series of first-person vignettes put together from writings discovered by Gant’s son after his death. These accounts include journal entries, letters and mission reports. Chapters often switch to new characters and settings with little in the way of introduction or context. These sudden shifts in tone can be jarring but help make the book’s stitched-together feel more tangible. Selby almost never presents information about the setting directly to the reader. Instead, characters usually refer to things in passing and the reader is left to play catch-up. This can lead to confusion but Selby never scrimps on detail and scenes are filled with such vivid descriptions that context alone is often enough to figure things out. The mystery unfolds gradually both in the present and the past and it can feel like vital pieces are being held just out of reach. Each new character’s perspective sheds light on the events at Snakewood and the heroes and villains shift several times throughout the story.

Snakewood mostly eschews typical good guy/bad guy roles in favor of a more amoral tone. Good deeds and sympathetic backstories are partnered with brutal means and selfish motives. A heroic victory for one means a devastating defeat for another. The backstories of several characters illustrate how lives are transformed by the passage of time. A pursuit of justice can warp into a vendetta and a life devoted to profit can give way to regret. Selby takes care to balance the characters’ perspectives and keep the morality of the book ambiguous from beginning to end. Selby is much more interested in the fate each person chooses for themselves and leaves it to the reader to decide what’s right and what’s wrong.