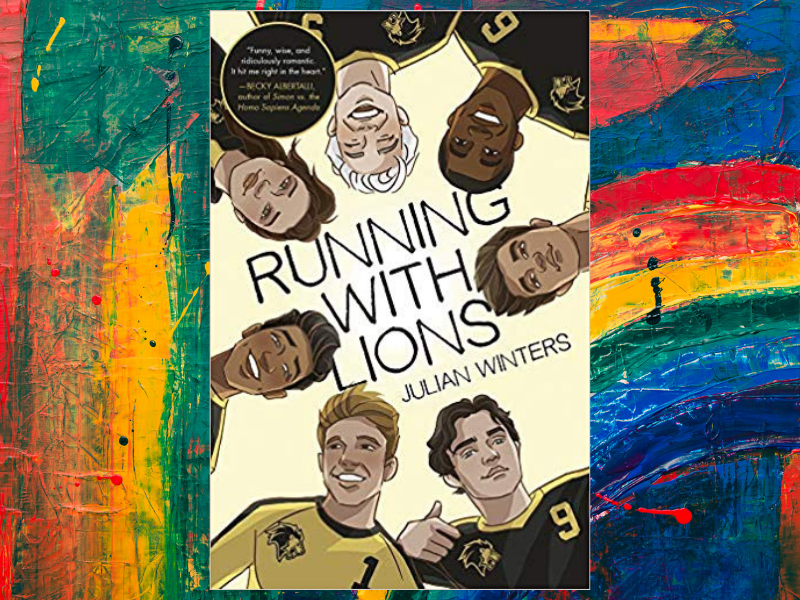 “Bloomington High School Lions’ star goalie, Sebastian Hughes, should be excited about his senior year: His teammates are amazing and he’s got a coach who doesn’t ask anyone to hide their sexuality. But when his estranged childhood best friend Emir Shah shows up to summer training camp, Sebastian realizes the team’s success may end up in the hands of the one guy who hates him. Determined to reconnect with Emir for the sake of the Lions, he sets out to regain Emir’s trust. But to Sebastian’s surprise, sweaty days on the pitch, wandering the town’s streets, and bonding on the weekends sparks more than just friendship between them” (Goodreads synopsis).

Krystal’s Review: This book reminded me of the movie She’s the Man…and I L.O.V.E that movie. Probably my favorite Amanda Bynes movie of all time. Both are full of adorable awkwardness, feature nondiscrimination (be it gender, sexual orientation, or religious), and show that sports teams are a type of family.  The Lions are an all boys soccer team built up around the idea that who you’re attracted to doesn’t matter–how well you play the game does (think of that speech Coach Dinklage gives at the end of She’s the Man–“We do not discriminate!”). One player is Muslim and multiple players are LGBTQIA+–including the main character, Sebastian. Actually, now that I think of it, Sebastian is the name of Viola’s twin brother in She’s the Man…coincidence? Hmmmm…

For all it’s lightheartedness, one thing that struck me during the book is Sebastian’s body-image issues. As a popular, athletic boy, you wouldn’t think that he would have those insecurities. I know that our society doesn’t highlight that “jocks” have body insecurities, so this book was refreshing for that aspect. Sebastian used to be bullied for his weight, and the mental damage is still there. One scene particularly highlights these insecurities.Sebastian’s having a rough day and staring into a mirror:

“His eyes spot how soft the skin around his belly is. His shaky hands grab at it. Christ. The familiar sting at the corner of his eyes only exacerbates his hyperventilating. A balloon is expanding in his chest. Every word in his head is ‘Bastian the Trashcan’ in those haunting bullies’ voices. Why?” (194-195).

I loved that Winters wrote such a multifaceted main character–almost as if he was an actual teen boy.

Read this book if you like: Odd One Out by Nic Stone, I Wish You All the Best by Mason Deaver, and Openly Straight by Bill Konigsberg