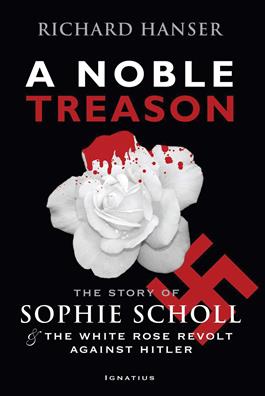 Sophie Scholl was only 21 years old when she was beheaded by the Nazis in Germany on February 22, 1943. Her crime? Distributing anti-Nazi leaflets at the university in Munich where she was a student.

The leaflets were written and published by the White Rose, a small, underground group of students whose members included Sophie and her brother Hans. The White Rose stood for everything the Nazis did not—compassion, faith, hope, and freedom—and its members had the courage to stand up to Hitler and his ideas when others did not.

In A Noble Treason: The Story of Sophie Scholl and the White Rose Revolt Against Hitler, author Richard Hanser provides a detailed and history-filled account of the White Rose and Nazi Germany, focusing on Sophie and Hans Scholl. I’ve never quite understood how Hitler could rise to power and how so many Germans seemingly could be swept up in his ideology. Through Sophie’s story, I’ve gained a better understanding of the German people and the evolving circumstances of the time and how it was possible for Hitler to wield so much power.

The Nazis, however, held no power over Sophie, Hans, and the other members of the White Rose who were willing to die—and did—for what they believed to be right. Their bravery was shown even to the end, when facing the guillotine, they accepted responsibility for their actions and declared their belief in freedom. Sophie and Hans’ story got me thinking: Would I be willing to do the same? I’d like to think so . . . but would I?