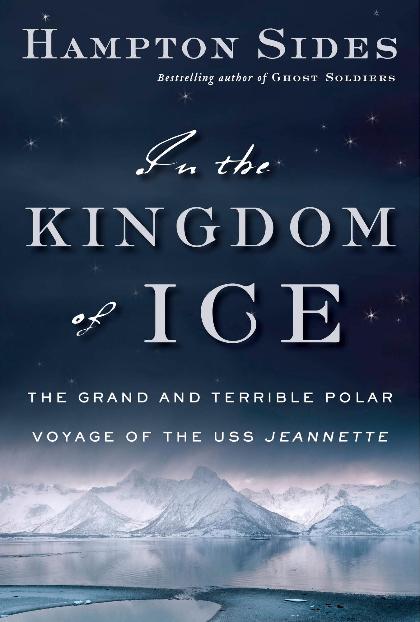 It amazes me to think that as recently as the late 1800s, no one knew anything about the North Pole. There certainly was a lot of speculation at the time. Was the pole made up of a warm, open sea? Was the Earth hollow, with a gaping hole at the top of the planet? Not only were scientists and explorers obsessed about what lay to the north, but the general public was as well. It was a mystery the world was clamoring to solve.

It was in the midst of this North Pole-related frenzy that the USS Jeannette set sail from San Francisco, California, on July 8, 1879, on a voyage to reach the top of the world. What happened to the Jeannette and her crew of thirty-three men on that fateful trip captured the attention of nations around the globe and provided the fodder for author Hampton Sides’ book, In the Kingdom of Ice: The Grand and Terrible Polar Voyage of the USS Jeannette.

It’s a fascinating and terrible story—and one that I couldn’t put down. For almost two years, the Jeannette was literally stuck—trapped in pack ice and unable to get free. Eventually, the ship’s hull was fatally breached.  The Jeannette sank to the bottom of the Arctic Ocean just 700 miles south of the North Pole, leaving its crew stranded in the brutal conditions and the world to wonder about the men’s fate.

This meticulously researched book recounts the men’s march across almost a thousand miles of frozen sea toward the nearest land mass—the Arctic coast of Central Siberia. They were freezing, starving, sick, and painfully desperate. But they also were determined.

The Jeannette’s captain, George DeLong, kept journals and a diary of the men’s voyage and their trek across the ice to reach civilization. Sides uses these and other resources to provide a chilling account of a struggle for survival. Did the Jeannette’s crew make it? You’ll have to read the book to find out.