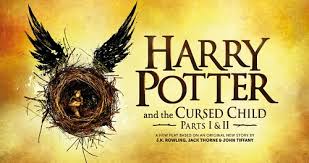 “It was always difficult being Harry Potter and it isn’t much easier now that he is an overworked employee of the Ministry of Magic, a husband and father of three school-age children.

While Harry grapples with a past that refuses to stay where it belongs, his youngest son Albus must struggle with the weight of a family legacy he never wanted. As past and present fuse ominously, both father and son learn the uncomfortable truth: sometimes, darkness comes from unexpected places” (Goodreads synopsis).

“A busy and crowded station.” (Act One, Scene One, Sentence One)

As a self-proclaimed Harry Potter nerd, you’d expect I’d have purchased AND read this newest of Harry Potter books as soon as it was released. You’d be wrong. I dragged my heels because I was genuinely SCARED to read this book/play. Based on the synopsis, I was expecting a Star Wars plot, and I wasn’t sure I could handle that. The major theme of father/son relationships was there, but my major fears didn’t come to fruition.

You all, I am so HAPPY that I didn’t wait too long to read this! It truly was fantastic to be back with all of the characters again. This play (and it is in play format, although as soon as you get into the story you forget and it doesn’t matter), brought all of the feels. Snape tells a joke! Who knew that Snape had a sense of humor?!!! I feel like I need to re-read all of the books just to see if he’d had one all along and I just missed it. And Draco! Who knew I’d EVER be fond of Draco Malfoy? At a few points in the story, I was happier with Draco than I was with Harry…ten points to Slytherin!

Besides getting to revisit most of our favorite characters, the plot was actually really good. If you are aware of the butterfly effect and know how time-travel can mess things up in the future, you’ll be okay with the back-and-forth of the plot line as Harry’s middle son, Albus Severus, and his best friend, Scorpius Malfoy, jump back-and-forth from the past to the present. The plot weaves around events found primarily in The Goblet of Fire because it is there that the boys want to right a wrong of the past. Will they succeed? I guess you’ll have to read the play to find out!