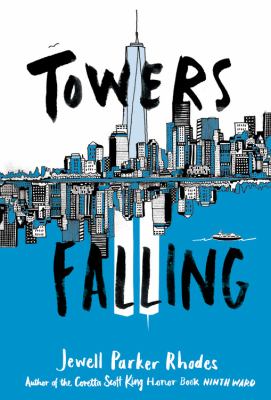 It’s hard to believe this year marks the 15th anniversary of 9/11. Most incoming high school freshman weren’t alive when the attacks occurred. Even though that tragic day may still be fresh in your memory, it is becoming “history.” This weekend I read Towers Falling by Jewell Parker Rhodes. It is about a fifth grader named Deja from New York. From her classroom window, the New York City skyline is visible with the Twin Towers now missing. Her class was given an assignment about the two towers. Initially Deja couldn’t understand how buildings they could no longer see had anything to do with her life. Deja’s eyes were open to the ripple effect something like this has for generations to come and what’s really important in life. There are two other chapter books focused on the subject of 9/11: I Survived the Attacks of September 11, 2001 by Lauren Tarshis and Nine, Ten: A September 11 Story by Nora Raleigh Baskin.

Picture books are available for younger children who may have questions about this topic. The Man Who Walked Between the Towers by Mordicai Gerstein is about a French aerialist who amazingly walked between the towers in 1974 during the construction of the towers. Fireboat: the Heroic Adventures of John J. Harvey by Maria Kalman handles the sensitive topic an an age-appropriate way. This book describes the growth of New York City starting with the Empire State Building and ending with heroes working to save this beautiful city on September 11, 2001. Showing the ripple effect internationally, 14 Cows for America by Carmen Agra Deedy tells the story a tribe in Kenya who bestowed 14 cows on an American diplomat to show sorrow for the acts of September 11, 2001.

The topic of September 11’s attacks is a difficult subject for adults to grasp and even more difficult for children. Hopefully through these books you and your child may discover answers to questions that may arise about this subject. The 9/11 Memorial Museum’s website has some helpful resources: tips for talking to your children about 9/11, lesson plans to teach different grade levels about 9/11, and a museum guide for visitors with children. The muesum guide is full of pictures and topics of discussion geared toward children 8-11 years old. As we approach the 15th anniversary of this dark time, take some advice from a children’s chapter book and remember to focus on what is truly important in life: friends and family.