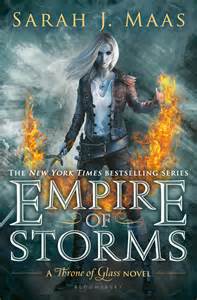 “The long path to the throne has only just begun for Aelin Galathynius. Loyalties have been broken and bought, friends have been lost and gained, and those who possess magic find themselves at odds with those don’t.

As the kingdoms of Erilea fracture around her, enemies must become allies if Aelin is to keep those she loves from falling to the dark forces poised to claim her world. With war looming on all horizons, the only chance for salvation lies in a desperate quest that may mark the end of everything Aelin holds dear.

Aelin’s journey from assassin to queen has entranced millions across the globe, and this fifth installment will leave fans breathless. Will Aelin succeed in keeping her world from splintering, or will it all come crashing down?” (Goodreads synopsis).

“Elide Lochan’s breath scorched her throat with every gasping inhale as she limped up the steep forest hill.” (Empire of Storms, Pg 11, Sentence 1).

“Is it here yet? Is it here yet? Is it here yet?” Yes, I turn into a not-so-patient toddler when a book series that I ADORE has a new book out. Let me begin with an apology to our Tech Services Department for my EVERY. SINGLE. DAY. check-in to see if the audiobook to Empire of Storms was in/processed yet. I HAD to have it in audio because if you’re reading this then you’ve probably (maybe? hopefully?) read another of my reviews and know that I basically do ALL of my reading via audio to keep my long commute to work not so long. Anyways, back to the review. Have I started the review yet? I should start. To the review!

Empire of Storms is book #5 in Sarah J. Maas’s Throne of Glass series (aka as my most favorite series that is currently out). I should start this review with a WARNING: This book has waaaay more adult content than the previous books. Ahem, there are rather detailed scenes that most YA books don’t detail quite so…explicitly. *Awkward throat clearing* So, now, you’ve been warned.

Aelin Galathynius is the most kick-butt of all kick-butt heroines out there. The assassin queen is the “ask questions later” type that I adore. Plus, she’s snarky. I love snarky. But Aelin is not the only point-of-view that we get in this book, and all of the side characters are just as well developed. Rowan, Manon, Dorian, Elide, Lorcan, Aedion, and Lysandra all own a little piece of my heart. If any of them die, E.Lockhart isn’t the only author I’m going to make write me an apology. This is starting to feel like a George R. R. Martin tale where I’m fearful of how many characters are going to make it out alive and I’m picking which ones I think will die so I can start preparing my heart. The book is fast-paced with loads of action (see previous warning) and fight scenes. (SPOILER ALERT) Our major characters FINALLY come together and are all in the same place at the same time (if only momentarily). As much as I hate to admit it , I definitely need at least a little romance in my stories, (SPOILER ALERT) so my heart was very happy with all of the main characters pairing up and falling in love…until, you know, it got ripped out and shredded to pieces. WHY DOES THIS SERIES ALWAYS MAKE ME CRY? At the end, you get to see what all Aelin has lined up (even from previous books), and realize that Maas really is that awesome.

Let me know what you think of the book/series!