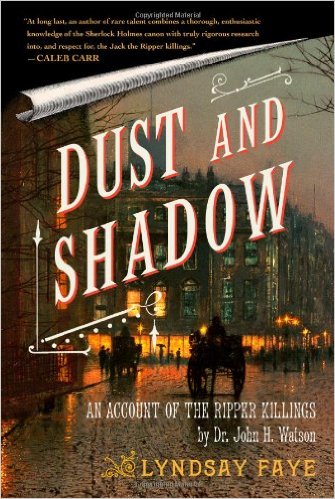 “I will be very much mistaken if the colour of this investigation, black as it were before, will not have darkened by this evening.”  ~Sherlock Holmes

In her debut novel, Lyndsay Faye presents a thrilling tale of horror and suspense featuring the great detective Sherlock Holmes and his assistant, Dr. Watson. The duo investigates a series of murders, seeming all connected to one terrifying serial killer, Jack the Ripper!  As time goes on and the killings continue unstopped by Holmes, the people of London begin to ponder the ultimate question: Could the great detective possibly be involved?

First of all, I applaud Lyndsey Faye for tackling not only the Jack the Ripper killings in her first book, but for her flawless integration of Sherlock Holmes lore. The idea of placing the famous Sherlock Holmes against the equally famous Jack the Ripper isn’t necessarily novel, however, her approach brings refreshing and exciting new life to this supposition.

At first I worried that the inclusions Jack the Ripper would entail a lot of gore and blood. Thankfully, the book focuses more on the reactions of Holmes and Watson rather than the gory details, leaving the gruesome imagination to the reader. This does not diminish the intrigue, horror, and heart-pumping suspense of the story in any way. We see Holmes slip further and deeper into desperate frustration under the weight of these terrible killings. We the readers are swept along until we are as anxious as Holmes is discover the true identity of Jack, in this electrifying, edge of your seat adventure.

With Halloween just around the corner, there’s no other book I would recommend more than Dust and Shadow by Lyndsay Faye. In having Sherlock Holmes tackle Jack the Ripper, Lyndsay Faye combines these disparate ideas in an ingenious way that makes this completely enthralling. Recommend for fans of Sherlock Holmes, suspense, or anyone interested in a classic idea with a new twist!