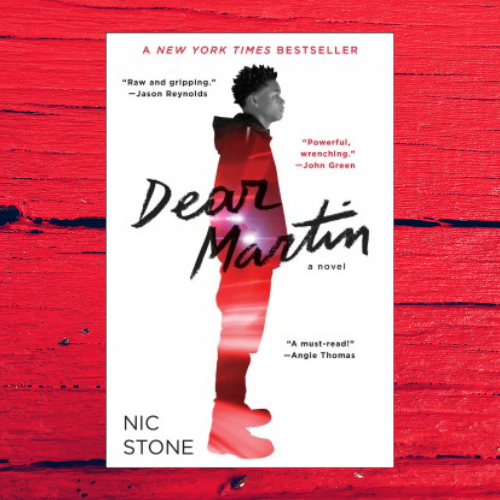 “In that moment when I thought I was dying, it hit me: despite how good of a dude Martin was, they still killed him, man” (pg 151).

Krystal’s Review: Nic Stone did an excellent job of portraying the hopelessness that African-American teens face every day while growing up in the “land of the free” where “all men are created equal”… with a ridiculous amount of evidence to prove the contrary. The book is comprised of a series of letters that Justyce McAllister writes to MLK, “Dear Martin”, as he’s trying to figure out why there’s injustice going on around him, and how he thinks MLK would want him to respond. There’s a scene with Justyce’s best friend Manny, where Manny’s father apologizes for not preparing his son, a teen who grew up with all the economic advantages of having wealthy parents, for the unrelenting racism he will face. This is a theme that has cropped up in other books like Angie Thomas’s The Hate U Give and Ta-Nehisi Coates’s Between the World and Me; black parents need to prepare their children to live in a society where you can die if you cross paths with a police officer and haven’t been trained on how to react/respond. White children aren’t given this same training from their parents. Why? I think that speaks loudly enough about our society. I watched a TikTok six months ago or so when a man talked about finding a white child lost on the side of a secluded state road. To try to help the child, he had to flag down a white woman in a minivan to call the police, because he was scared for his own well-being if he was found out there with the child. This is the society we live in. Books like Dear Martin aren’t only vital because they keep the discussion open about the insidious racism that prevails in our society, but also because reading stories like this serves two different purposes: one, it helps unite those  who can relate, and two, it allows those who can’t possibly relate to gain some insight. I’m a white woman who knows nothing of what it is like to grow up as a black teen in our society, but after reading this, I feel a little closer to understanding a fraction of the struggle.
Read this book if you enjoyed The Hate U Give by Angie Thomas, Long Way Down by Jason Reynolds, or Black Boy, White School by Brian F. Walker.