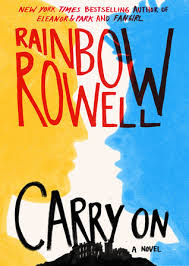 Goodreads Synopsis:  “Simon Snow is the worst chosen one who’s ever been chosen. That’s what his roommate, Baz, says. And Baz might be evil and a vampire and a complete git, but he’s probably right. Half the time, Simon can’t even make his wand work, and the other half, he sets something on fire. His mentor’s avoiding him, his girlfriend broke up with him, and there’s a magic-eating monster running around wearing Simon’s face. Baz would be having a field day with all this, if he were here—it’s their last year at the Watford School of Magicks, and Simon’s infuriating nemesis didn’t even bother to show up.

Carry On is a ghost story, a love story, a mystery and a melodrama. It has just as much kissing and talking as you’d expect from a Rainbow Rowell story—but far, far more monsters.”

Carry On, Chapter 1, Sentence 1: “I walked to the bus station by myself.”

I HATED this book. This was an “I almost gave up and quit” book because Simon was such a “git”. I almost never give up on a book. Seriously, I kept comparing him to Harry and couldn’t take it. With that being said, I’M SO GLAD I STUCK TO THIS BOOK! I ACTUALLY LOVE THIS BOOK SO, SO, SO MUCH! It literally took me twenty-nine chapters, but the entrance of Baz made it all worthwhile.

For fans of Rowell’s Fangirl, you’ll already know that this is based off of a fanfiction book written by Cath. If you haven’t read Fangirl yet, you really need to! It isn’t necessary for this book, but it’s a fantastic book and you’ll at least be prepared for the aspects of fanfiction that you see in this book. After reading the synopsis, you’ll know that there are strong similarities between this book and the Harry Potter series: boy wizard as “The Chosen One”, arch nemesis, super evil character threatening to destroy all of magic, smart best female friend, a head wizard “The Mage”, and a wizarding school. Now, take all of those elements and throw them into a blender…out comes Carry On: The Rise and Fall of Simon Snow.

Baz (whom I think of as the Malfoy character) is actually Simon’s roommate (for seven years) and a vampire. They have the same antagonist views toward each other as Draco and Harry…only that changes drastically as the story goes on. The Mage is no Albus Dumbledore, and that’s all I’m saying because spoilers are begging to spill over my fingertips. As to Penelope (the Hermione character), she pretty much stays the same. I mean, Hermione was perfect, why change her character?

If you’ve read my previous book reviews, you know that I listened to the audio book version of this. Just so you’ll be prepared, (unlike me, whose eyebrows constantly stayed raised for the first quarter of the book until I was immune to it) ‘f’ bombs get dropped. A lot. Those brits sure do enjoy their cursing. Also, if you listen to the audio book, you’ll have a hard time trying NOT to affect an English accent for days afterward. You’ve been warned.

Read the book: it’s got one of my favorite kissing (snogging) scenes of all time, it’s snort-stop-snort because you snorted-stop-bust out laughing funny, and has just the right amount of action to keep the plot going (starting from Book Two…aka “The Entrance of Baz”).