The Library's Mission is to provide information, education and technology to help the community live, learn and grow.

We are customer focused and deliver positive experiences.

We will act in a professional manner, always mindful of the impression we make on our customers and co-workers.

We are committed to protecting individuals’ rights to read and explore without interference or monitoring.

We are committed to accessibility and provide equal and open access to everyone.

We play a unique role in our community so that learning can thrive.

New Castle-Henry County Public Library’s roots date back to 1829 when the county approved funding for a township library located in the County Courthouse upon its completion in 1830. The collection of books changed locations several times in the following decades. The library received taxpayer support in 1898, independence from the local school board in 1913, and a permanent location in 1916.

Wealthy industrialist Andrew Carnegie donated millions of dollars worldwide establishing public libraries, and New Castle was among 64 Indiana communities receiving a “Carnegie” library. This library building opened in 1916 with 4,000 volumes and 1,803 registered borrowers. In 1926, the Assembly Room in the library’s basement became new Children’s Library. The library’s services further expanded in 1942 when Henry County contracted with the New Castle Public Library to provide services for other areas in the county, and the library purchased its first bookmobile.

In the early 1970s the library received an anonymous donation to construct a new building. The library board purchased two lots of land with plans to construct a new building, which became known as the “new ’76 building” after the year of its completion. Local teacher and library lover Alice Catherine Ratcliffe left one-half of her estate to the library in 1979. In 1986, these funds were used to renovate the Carnegie building (renamed the “Ratcliffe Building”) and construct a skywalk to connect it to the ’76 building.

In 2006, the library completed a building project which added 45,000 new square feet of space and merged the Ratcliffe (Carnegie) building, ’76 building, and a new addition into one structure. This project preserved the original Carnegie library and used its styling throughout the rest of the building. The result is a functional,  attractive facility housing 223,674 volumes and serving 28,718 registered borrowers. 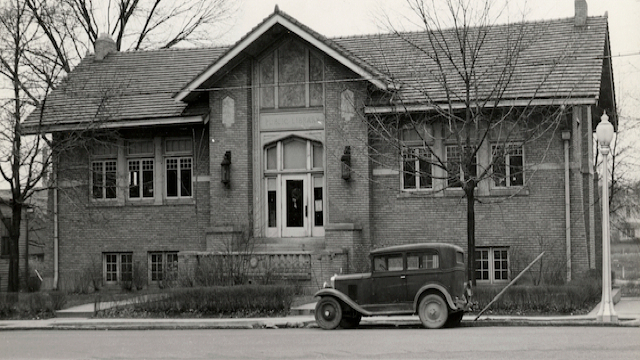 The library facilities are temporarily closed as we follow the public health and safety recommendations regarding COVID-19. Please visit the digital platforms. As we move to the next phase of our reopening plan, you can find our reopening procedures here.